Home » Articles » How to keep your dryer safely working

How to keep your dryer safely working 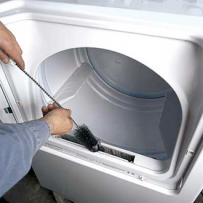 How to clean your dryer lint trap
Keeping your dryer lint free takes very little time and will serve you well in the long run.  Regularly cleaned dryers work more efficiently – saving energy and money – because they have better airflow.  They are also safer as lint deposits in the dryer pose a serious fire hazard that is easily defused by regular and careful cleaning. Avoid damp or wet loads and longer-than-expected drying times or unnecessary dryer repairs by following these three simple steps.

Make these quick and easy steps a routine part of your dryer maintenance to improve the performance of your machine, save you money and keep your home safe.

Tip: If soap or fabric softener residue regularly builds up on the Dryer lint trap try using a little less on every washer load. High Efficiency washers don’t need too much soap or softener to do a great job.

Adelaide Hills Appliance Service specialises in dealing with Real Estate and Property Management services for repairs to appliances within tenanted homes. We can contact the tenant direct (with your permission) or work with you to arrange a suitable time to carry out repairs without any inconvenience. Trust Adelaide Hills Appliance Service to get the job done! Call Brett: 0407 392 001.